Summer is a busy time for me with a bit of travel and a lot of writing and reading. Plus, as many of you know, I now have ducks!

Long story, but meet Darcy (the white Pekin) and Lizzy (the black Indian Runner). I’ve had them since they were ducklings and they are now a little over four months old. I’m completely smitten by my ducks and fortunately they seem to adore me right back. Ducks are kind of like dogs – they follow simple commands (come, stay, go home, etc.) and are great company. I spend almost every afternoon sitting in the fenced-in backyard with them. They forage, run around, take a dip in the kiddie pool, and act cute, and I read. *

I’ve been reading some fantastic books! Here are some I recommend if you’re looking for great summer reads! 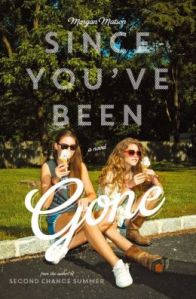 Since You’ve Been Gone by Morgan Matson (YA)

Isla and the Happily Ever After by Stephanie Perkins (YA)

If you pre-order you get some really cool swag! 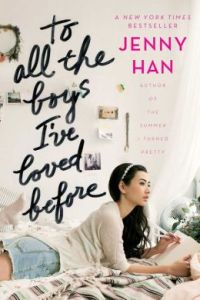 One Plus One by Jojo Moyes (adult fiction)

Plus don’t forget the great books I’ve highlighted in my Spotlight interviews!

If you have book recs for me, feel free to share in the comments! I have a huge towering TBR pile but I’m always willing to buy more books!

*For anyone concerned about the well-being of my ducks, I have a long history of working with animals of all kinds and a degree in Zoology.

If you missed it, be sure to check out my interview with Justina: click here.

Using a random number generator and numbering the comments in order of appearance, the winner of a copy of Promise of Shadows is: number 3. Who is that? Why it’s Catey! WOOHOO! Please email me at just kid ink at yahoo dot com (no spaces) with your mailing address and I’ll be sure to get you your copy ASAP!

Thanks for stopping by! Come back soon for more book buzz and give-aways.

I’m super thrilled to shine the spotlight on YA author Justina Ireland and her fabulous novel Promise of Shadows! I met Justina at the Vermont College Novel Writing Retreat earlier this year and found her to be hilarious and talented. I could not put this book down! Stay tuned below to enter for a chance to win a copy of this suspenseful, action-filled, thrilling book.

The story opens on Zephyr who is stuck in Tartarus’ worst section – the Pits – as punishment for killing one of Hera’s guards. Zeph is a Harpy but a failed one, and is scared when she shouldn’t be. Fortunately, she has found a protector in Cass. When her childhood friend (and crush) Tallon comes to the rescue to release her from the Underworld, she and Cass join Tallon, his dragon brother Blue and Zeph’s childhood nemesis Alora in a quest to keep Hera from taking over the mortal world. Zeph, a very reluctant heroine with a dark power, has growing feelings for Tallon which complicates matters. Exciting and original and full of adventure and tension!

Please share with us how you came up with this amazing story. What was the writing process like for you?

Zephyr had actually been kicking around in my mind for a little while.  I’d tried her in a couple of different stories, but things never really clicked.  Mostly that’s because I don’t outline.  I’m a pretty disorganized writer.  I start with the opening and the ending, but all that story in the middle I have to discover during the writing process.  So that was a lot of different things throughout the drafts, but it eventually clicked.  And then when my editor came back with notes it clicked even more.

Zephyr is a “failed” Harpy who is afraid of things any proper Harpy should not be. She struggles with this as she mourns the loss of her family. When she learns she is they prophesied Nyx and is destined to battle Hera, she is not quite thrilled. Zeph is a layered character who felt very real to me. How do you get to know and develop your characters, in particular, Zeph?

Zeph was hard for me, because I desperately wanted her to be a badass.  And she isn’t.  At heart, she’s a coward and lazy, and I like to think that if I were the Nyx I’d embrace it wholeheartedly and start kicking ass on day one.

But that isn’t Zephyr, so I really had to put aside my personal feelings and think what would someone who has zero self-confidence do.  I ended up rewriting most of the book because each revision I’d think “No way would she do that, she’s not there yet.”  It was a definite process.

I’ve long been fascinated by Greek mythology. What brought about your interest in using Greek mythology and these characters? Did you have to do a lot of research?

I’ve loved Greek mythology since I was a kid.  I’m actually a big fan of all kinds of mythology, and I use several mythologies in Promise of Shadows (Greek just tends to be the most prevalent).

I do a ton of research before writing anything.  For my Greek mythology my go to resource is the Rutledge Greek mythology book, which is about a thousand pages long.  But I usually take whatever the established story is and change it to suit my whims.  Harpies are a great example.  In the established mythology they’re these monstrous birdlike creatures.  In my story, they’re mercenaries.  But I use enough of the established details so the people can feel the details are familiar and fresh at the same time.

Who is your favorite Greek god/goddess and why?

I’m a big fan of Ares, although I also dig Hades.  My favorite Greek gods/goddesses tend to be the ones that don’t have such a great reputation, because I like to imagine that maybe they aren’t really as bad as people say.  I love a tragic backstory.

Justina Ireland lives in a house made of books. At least that’s the excuse she gives when people trip over one. When she isn’t accidentally killing house guests with her TBR pile she writes books. She enjoys eating, sleeping, and watching Judge Judy on her DVR. You can usually find her on Twitter.

For a chance to win a copy of Promise of Shadows, just follow these instructions:

1.  Comment below and for fun tell me your who your favorite Greek god/goddess is. Mine is Athena, mostly because I just recently visited Athens and learned a ton about her. I also like that she’s the goddess of wisdom and the arts.

2. You must have a US or Canada mailing address to win.

3. Enter by Friday, July 11th midnight EST. Winner will be chosen at random and announced here on Tuesday, July 15th.

A Hitch At The Fairmont

If you missed it, click here to read all about Jim and his adventure mystery novel set in San Francisco.

Using a random number generator, the winning number is 1! Counting from the first comment, this makes Carl Scott the lucky winner! Congratulations! Please email me at just kid ink at yahoo dot com (no spaces) and provide me with your mailing address. I’ll make sure your prize is in the mail to you ASAP!

Stayed tuned for more book buzz and give-aways! Thanks for stopping by and happy reading!